Um, buckle up kids, we’ve got a wild ride incoming. “Is it possible two grieving mothers, dabbling in seances inside the presidential residence, conjure something other than their beloved sons?” Is it? I mean, is it? Discovery+ and the Travel Channel set out to answer the question that I feel certain no one before now had asked with the “shock doc” “Demon in the White House.” 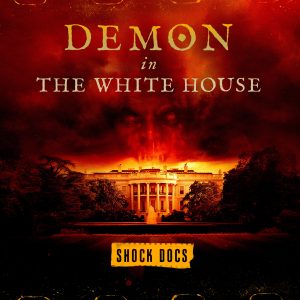 Per the press release, “The seat of power at 1600 Pennsylvania Avenue may be the most haunted site in the world. New Shock Doc, ‘Demon in the White House’, launching Friday, November 26 on Discovery+, uncloaks the historic origins of the horror of two grieving First Ladies. Did they unwittingly invite an evil presence with a malevolent agenda that may still torment America’s presidents, as well as their families, visitors and closest advisors?

President Franklin Pierce and First Lady Jane Pierce lost their son Benjamin at age 11. President Abraham Lincoln and First Lady Mary Todd’s son, William, died at the same age. Both children perished during their father’s administration. The Shock Doc thriller opens archival papers, correspondence and diaries to document a timeline of supernatural events that unfolded after these grieving families sought solace in the fashionable new spiritualism and seance movement – and the potential catastrophic consequences that followed.

As new presidential families moved into the White House over the past 150 years, there continued to be supernatural activity and strange happenings within the walls of this famous residence. One of the presidents most vocal about paranormal activity was Harry Truman who wrote several letters to family members explaining the disturbances. Historians count nine separate occasions that he wrote about the ghost of the White House, and once said, ‘sure as shooting the place is haunted.’

It is believed that renovating a building can stir up ghostly activity. When the White House was being gutted, Truman hired National Park Service photographer Abbie Rowe to document this historic process. One ordinary photo shows a bulldozer and three men standing in a corner. On the other side of the frame, is a figure that appears transparent The three men standing at the same distance are obviously solid, their shirts and ties are identifiable, and the other figure has no discernible articles of clothing. This enigmatic photo may be the first documented ghost photo at the White Ho

Obviously, I don’t share EVERY press release for a paranormal television show or series. If I did, given the rate that Discovery/Travel Channel churn them out it would be all I did. However, I think we can agree that this just the right amount of “out there” that it had to shared. So, thoughts? Are you going to check it out?