Interesting title, no? The title is the way it is because this is an excerpt from the recently released “The Collected Letters of Alan Watts”. This is a little bit of history because this is from an actual newsletter Watts wrote in 1940! Well I think it’s cool.

Once upon a time there was a lunatic who used to pass the time by sitting in a corner and beating himself on the head with a brick. When asked the reason for this interesting behavior he replied, “Well, it feels so pleasant when I stop.” Very often the lunatic is nothing more than a caricature of people supposed to be sane; we call him a lunatic only because he expresses fundamental traits of human nature in the most obvious and concrete manner, whereas sane people carry on the same processes in more veiled and mysterious ways. And the performance of beating oneself on the head with a brick is an exact caricature of man’s chief spiritual problem, for we have to realize that our apparent lack of what Oriental sages call Enlightenment (bodhi) or spiritual freedom (kaivalya) is due to our not having ceased to knock ourselves on the head with a brick. Naturally, the realization of Enlightenment is accompanied by an enormous sense of relief — not because we have acquired something new, but because we have got rid of something old. Enlightenment, wisdom, or a sense of harmony with life and the universe is present within us all the time; it becomes apparent when we cease to use the brick just as the moon becomes visible when the clouds are blown away. But we appreciate the light of the moon more keenly when it emerges from the clouds; if it had been shining openly all the time we should never have experienced the sudden ecstasy of light breaking in upon darkness. And for this sudden ecstasy we have to be thankful for the darkness as much as for the light.

At the same time, our lack of Enlightenment or freedom is only apparent, for in a special sense “the light shineth in darkness; and the darkness comprehended it not.” In this sense the darkness is also a manifestation of the light but does not understand it. Therefore as soon as we understand that our very lack of realization is itself an aspect of Enlightenment, our ignorance turns into wisdom. Thus a Buddhist text says, “If the accumulation of false imaginations is cleared away, Enlightenment will appear. But the strange thing is that when people gain Enlightenment they realize that without false imaginations there could be no Enlightenment.” In Vedanta philosophy and Buddhism alike Enlightenment is the nature of the universe; all possible forms and aspects of life are manifestations of Brahman or “Buddha nature” because there is only one ultimate Reality. Thus maya, which in one sense is darkness or illusion, in another sense is the creative power of Brahman. Now Enlightenment is the condition of union with that power, and we realize its freedom in understanding that not even in ignorance or darkness can we be deprived of that union.

There is a Buddhist story of a disciple who asked his teacher, “How can I ﬁnd liberation?”

The teacher replied, “Who is putting you in bondage?” “Nobody.” “If so, why should you seek liberation?” And for this reason it is often said that Enlightenment cannot be found by doing something about it, for it is always a question of being rather than doing. Hence the saying, “Seek and you will ﬁnd not; become and you will be.” Become what? Become what you are. Thus the Orient has always sought wisdom in meditation rather than action, but from this it should not be supposed that meditation is a passive way as distinct from an active way. Both activity and passivity are forms of doing; the latter is indirectly doing by not doing. Therefore the West has found it difﬁcult to understand what is really meant by meditation. Meditation is not only sitting still like a Buddha-ﬁgure, nor is it thinking about something, for the Upanishads say that the stars, the trees, the rivers, and the mountains are meditating — unconsciously. Conscious meditation is a knack, and as an exercise it is a way of learning that Enlightenment comes to pass in us as much when we are doing nothing to produce it as when we are in the midst of activity. Thus the “sitting-still” meditation of the Orient is so much valued as a way of enlightenment because in it we are able to realize that our spiritual freedom consists not in our manner of doing and thinking, but in the fact of our being.

Enlightenment and realization is the main theme of our informal lectures and discussions at my apartment during the ﬁrst few months of this year, and future letters will keep those who cannot come acquainted with the course of our work. We shall be studying ﬁrst the Hindu and Chinese views of Enlightenment and the technique of its realization on the basis of readings from original sources and also from that famous allegory of the “Oxherding Pictures.” We shall then go on to consider the expression of Enlightenment in Chinese art and in the mental and physical culture of the Far East as a whole. Finally we shall compare our ﬁndings with Western equivalents of the way to Enlightenment — in particular with Christian mysticism and analytical psychology. This letter is a cordial invitation to those of you who do not already come to join us. Groups are now meeting on Mondays at 8:30, on Wednesdays at 8:30, and on Thursdays at 8:30. The last of these is generally speaking reserved for those who have already some knowledge of these matters and who do not feel the need of any introduction to basic principles. The group which meets on Thursdays at 3:15 has not yet been started again, but will begin as soon as arrangements can be made, and those who would like to come on Thursday afternoons would assist me by letting me know as soon as possible. And may I say again that comments on these letters will always be welcome and will always be answered. 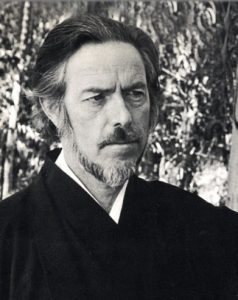 About Alan Watts:
Alan Watts (January 6, 1915 – November 16, 1973) was a British-born American philosopher, writer, speaker, and counterculture hero, best known as an interpreter of Asian philosophies for a Western audience. He wrote over 25 books and numerous articles applying the teachings of Eastern and Western religion and philosophy to our everyday lives.

Excerpted from the book “The Collected Letters of Alan Watts”. Copyright ©2018 by Joan Watts and Anne Watts. Printed with permission from New World Library — www.newworldlibrary.com.