Would you sell your soul to the Devil? At what price? How about if you knew you were dying and didn’t have long to live? It’s not like the dead have anything left to lose. But if the Devil’s so interested in your immortal soul that he’s willing to offer you anything in return then maybe, just maybe, someone’s getting fucked on the deal.

Hobo John is a terminally-ill English guy, with a troubled past, whose bucket list is all about the blues. He’s a blues aficionado on a journey across Mississippi to see what is considered by many to be the birth place of the blues. Delta Blues came from the Mississippi Delta and is one of the earliest styles of blues music.

On a drunken night in Clarksdale Hobo John enters into a Faustian pact with a devilish character, called Fat Man, who makes him an offer that he can’t refuse. In exchange for his life, which is at its end anyway, he must cross over to the afterlife of the Mississippi Delta to record blues artists both famous and unknown from the 1930s. 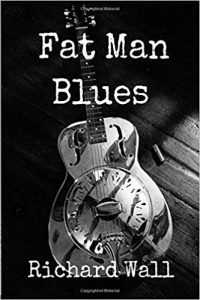 It’s a real ‘devil at the crossroads’ moment but, unlike Vegas, what happens at the crossroads doesn’t stay there. To begin with Hobo John has a blast hanging out with the souls of dead musicians but working for Fat Man is dirty business, with untold consequences, and there’s always a price to be paid.

There’s much more to the story, including twists and turns that I don’t want to spoil here, but the plot isn’t really the point. It’s all about the music. You don’t have to be a blues fan to enjoy the story but you’ll sure as hell learn a lot about the blues along the way.

Robert Johnson fans will especially get a kick out of it as they catch references to songs like “Crossroad Blues,” “Me and the Devil Blues,” and “Hellhound on My Trail.” Legend has it that in the Deep South in the 1930s Robert Johnson met the Devil at the crossroads and sold his soul to become the greatest Delta Blues artist that ever lived.

The author may spit at me for saying this but, at least structurally, the book has much in common with Sophie’s World by Jostein Gaarder. In that book the story is used as a way to give you a history of philosophy whereas here a similar conceit is used to give you a taste of the blues. Just enough to wet your whistle — like drinking whisky straight from the bottle.

Richard Wall writes like a motherfucker. I mean that in a good way. He’s clearly passionate about the blues and has a deep knowledge of music history and blues lore. I’d love for the novel to be released as a dramatised audiobook with an accompanying soundtrack featuring Delta Blues songs hand-picked by the author.

Fat Man Blues is a wild ride. It’s violent and bloody in parts but the writing is tight and visceral and remains faithful to, and worthy of, the music that inspired it.

You can buy the book here ( or here in the U.S.) and check out his other work at richardwall.org

About James Garside:
James Garside is an independent journalist and writer. You can find him at his website jamesgarside.net and chat with him on Twitter.