1. Believe it or not, you and I talked all the way back in 2009 about your book “Politics and the Occult.” How does your new book, “Dark Star Rising: Magick and Power in the Age of Trump” differ from that earlier work?

In Politics and the Occult, along with giving an overview of the relation between the two in the modern world, I also wanted to show that the association of occultism and far-right politics, which has become a kind of cliche, is not as necessary or exclusive as writers like Umberto Eco believed, and that there is plenty of evidence for what we can call a ‘progressive’ occult politics. Dark Star Rising is different, first because I am writing about current events – it’s a work of journalism to some degree, or ‘history in the making’ – but also because in it I am looking at what seems to be a rise of a form of occult politics in the alternative-right, both in the United States and in Russia. So in Dark Star Rising I am looking at some occult politics that seem to be happening on the right, here and now.

2. You draw a fairly direct line from New Thought to branches of Christianity (particularly Prosperity preachers) to Chaos Magick. Do you think any of these groups acknowledge their similarities and lineage?

One of the things that struck me as very interesting was that in terms of technique, theory, practice, and aim, there seems to be much in common between New Thought or positive thinking and chaos magic. You wouldn’t think that Norman Vincent Peale and Austin Osman Spare had a lot in common, but in some fundamentals they do. I recognized this when following up the idea that the alt-right had used ‘meme magic’ – via Pepe the Frog – to put Trump into office. Meme magic – using the internet as a way of making things happen in the real world – is an offshoot of chaos magic. Chaos magic differs from traditional magic in that it does not depend on the traditional methods and appurtenances, such as the circle, wand, sword, spells, etc. Instead it relies on the magician’s initiative, creativity, imagination, and will.

Chaos magicians use whatever is at hand, rather in the manner of an objet trouve, or found art, when some ordinary item is taken out of context, placed in another, and called ‘art’. What is most at hand today is the internet and the memes that propagate on it. The idea is that Pepe became a kind of hyper-sigil, or magical symbol or spell, and by saturating the internet with images of him, the people behind this believed they could affect the outcome of the election. And it seemed it did – Trump won. This was why Richard Spencer claimed that “we” – the Pepeists of the alt-right – “willed” him into office.

Now, Trump himself is a devotee of positive thinking; Norman Vincent Peale was a mentor, he says. Peale’s positive thinking comes in an upbeat, cheery Christian wrapping, rather different than chaos magic, but what he is actually getting at is not that different. Both are results oriented, positive thinking aiming at a “realizable wish,” and chaos magic at an “achievable reality.” Both have a very flexible attitude toward facts – in fact our attitude toward facts is for both more important than the facts themselves. There are other similarities. So we have Trump the positive thinker being helped into office by alt-right chaos magicians. But then, what word characterizes Trump’s presidency so far? I’d say chaos and I think others would too. And then Pepe of course turns out to be Kek, the ancient Egyptian god of chaos…

So in answer to your question, no, I don’t think that,say, people following the prosperity gospel know that in some basic way, what they are about is not very different from what a chaos magician may get up to. Some of the more Christian of them would most likely be appalled. In fact many Christian thinkers were appalled by Peale because of the links between positive thinking and more outright occult forms of New Thought, which Peale read and which he translated into a more palatable form. And I should point out that I’m not saying that there is a direct line in any historical sense, between positive thinking and chaos magic, but that what we can call the phenomenology of the magic involved is similar. 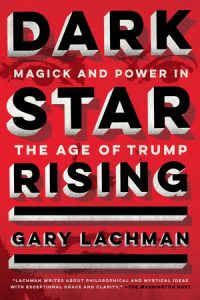 3. Are these things, such as New Thought, etc. inherently “bad”?

By asking if New Thought is bad, you have to decide in what sense you are asking this. If you dismiss the idea that New Thought can work, then what’s bad about it is that it is false and, like other scams, can harm people who get involved with it. But if you accept the basic premise that the mind, consciousness, in some way that we do not fully understand, is an active agent in the world and can affect it – that “thoughts are things” – then we enter a different area. This is where the notion of a responsibility of the imagination – as Owen Barfield called it – comes in. And this is something that practically all esoteric, spiritual, what have you traditions make clear. So if it is the case that, unlike Vegas, what happens in the mind doesn’t necessarily stay there, then it becomes rather important to be aware of what’s happening in the mind. Of course, from our rational, scientific perspective, this is nonsense. But as I say in the book, it is precisely this perspective that is being, or has been, undermined in our post-truth, alternative fact world – which is itself the result of a process that started early in the last century. The partitions separating what is possible from what is not are thin, just as the membranes separating fact from fiction, truth from falsehood, reality and fantasy, are dissolving. I’d say we have a responsibility now to be aware of this.

4. “Dark Star” is quite informative for those unfamiliar with Chaos Magick. Would you mind giving my readers a brief description of what Chaos Magick is?

5. So, is the alt-right filled with unintentional magick users?

6. Several magick groups have been supporting and promoting group rituals to counter the effects of a Trump presidency. Do you think these can have any effect?

I know that the global “binding spell” cast to impede Trump and all those who abet him, goes on, and that there are other forms of what’s being called the “magical resistance.” Will it help? That is usually the first thing people ask. But as realistic magicians know, there are always many different forces at work, and what needs to be aimed it is, as I mention above, a “realizable wish” or ” achievable reality.” Which means, ironically enough, don’t expect miracles. But the idea of magical political opposition has been around for a long time. That was one of the points of Politics and the Occult – that the two are not as strange bedfellows as we might at first think. Did the witches put a monkey wrench into Trump’s first shot at the travel ban?

7. With such a fast-changing Presidential administration, and the inherently slower pace of writing and publishing a book, how much has changed between writing the book and now? Will you consider a book with timely subject matter again?

The main change since writing the book has been Steve Bannon’s exit from Trump’s inner circle. I finished the book last August. A lot happens very quickly these days – that, as we all know by now, is the fluid character of our time – and not long after I delivered it I knew that some of it would be old news by the time it appeared. I was able to add a short note at the end to say precisely this. But as I say above, this is ‘history in the making’. It struck me, as I’m sure it did other people, that with Trump’s election, something very different had taken place. In the book I say that in one sense we can see this as the singularity people have been waiting for for awhile now. A singularity is an event in which our usual, normal ideas about reality breakdown, or at least no longer apply. It strikes me that this is precisely what has happened, and we have our post-truth, alternative fact world to show for it. A world in which there is very little difference between reality and its electronic representation. This too is the result of a process that got going more than a century ago. We are feeling the effect of what I call “trickle down metaphysics.” The post-everything world is the outcome of the nihilism that the philosopher Nietzsche saw was irrevocably on its way back in the 1880s. The relativity of all values that we welcome as a liberation from the dominance of western rationality, is exactly what Nietzsche said was coming. To see this happening is disturbing but also thrilling. History has caught up to us.

In fact I am working on a follow up book about Russia but I can’t say more than that now.

8. In the mid-nineties you moved from the U.S. to London. How do think America and Britain compare when it comes to politics and magick?

I think Americans believe in the possibility of political change – or at least used to – more than Brits, but the Brits have a longer tradition of magic. But when Americans do occult politics, they do it up right. In October 1966, during the anti-Viet Nam War march on Washington, Abbie Hoffman and Allen Ginsburg tried to levitate the Pentagon, while the filmmaker and magician Kenneth Anger tried to exorcise it. The Brits are mostly just worried about Freemasons.

9. Do you have any upcoming projects that you can share with my readers?

10. Parting shot! Ask us at The Magical Buffet any one question.

What do you think? New Thought, positive thinking, chaos magic – do they work?

Indeed I do. You see the power of the placebo effect and you learn that the human mind is capable of pretty amazing things.

About Gary Lachman:
Gary Lachman is the author of many books on consciousness, culture, and the Western esoteric tradition, including “Rudolf Steiner: An Introduction to His Life and Work”, “A Secret History of Consciousness”, and “Politics and the Occult”. He writes for several journals in the US and UK and lectures on his work in the US and Europe. His books have been translated into more than a dozen languages, and he has appeared in several radio and television documentaries. A founding member of the rock group Blondie, Lachman was inducted into the Rock & Roll Hall of Fame in 2006.

Are you still reading? Congratulations because you’re about to learn about our giveaway! That’s right, the kind folks at TarcherPerigee gave me an extra copy of Lachman’s new book “Dark Star Rising: Magick and Power in the Age of Trump” to give to one lucky reader! The giveaway will end Sunday, June 3rd at 11:59pm Eastern. Must be 18 years or older to enter. Open to international readers.