It’s graduation season, a time of high hopes and high anxieties. This month’s Querent, whom we will call Veronica, asks if she will be likely to get full time employment after graduation. In conducting her reading, the initial impression before drawing any cards is that of success, having a job offer through an agency she is currently connected to through internship or temporary work that becomes long term, especially with the help or mentorship of a friendly professional woman within the organization. I also sense an initial compromise, a feeling that time with this job shows is to not be as Veronica was expecting. Either not being recognized for her skill level or not being compensated at the rate she was expecting initially, but that it is a valuable starting point nonetheless. I feel like this job will be a foot in the door that will bring Veronica valuable experience, yet in 1-2 years she will make a significant move and will seek new employment at that time. The sense I have is this is a move to an area in the midatlantic, connected to a change in relationship status. 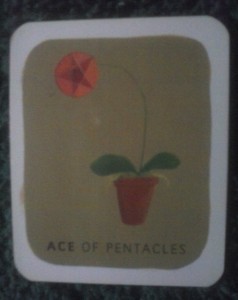 The cards drawn are positive indicators for career. Right away the Ace of Pentacles appears. This is a positive beacon of a new job being handed down unexpectedly. Veronica may still need to send out applications, network and interview, but this opportunity seems closer at hand than she may expect and appears to fall into place. This is a new beginning and as a starting point may not have the status, pay, or level of credibility from peers that she is expecting, but she will come to earn the recognition she deserves with time. The impression that goes with this job is that of a city area and a fast paced environment where it feels as if Veronica is part of a large structure that involves some excitement as it is a very action oriented workplace. It feels like being part of a race- at times exciting, at times high pressure, but that she has the energy and talent to keep up. I also feel like at first she will be restrained from fully getting engrossed in the work- either prolonged training or orientation sessions, a slow start but this will not be for long and once the action starts she will be quite busy. 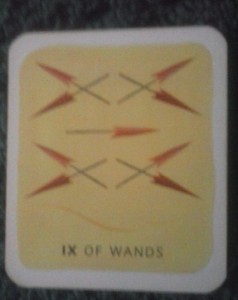 The following cards are the 9 of Wands and the Devil. This suggests that Veronica will receive much in the way of training and at times may feel like she is spinning her wheels and not progressing. I feel like there is potential for frustration with a colleague or with the organization itself, this frustration stems from perceived criticism or miscommunication. If communication blocks are caught early and addressed assertively with an open mind, this can perhaps be avoided. The key is to take feedback seriously but not personally. I feel like it will also be important for Veronica to have an outlet for her stress to keep balance in her life. This is especially true with the appearance of the Devil card as it is likely that Veronica will become so enmeshed with work responsibilities and stress that it could trigger headaches, exhaustion and compulsive escape behaviors to “turn off” work on the off hours such as drinking or over indulging in other escapes. Veronica will do well to find healthy ways to leave work at work and take the valuable lessons from this job without allowing criticism or work stress to impact her self esteem and identity. I also feel like this job varies from the initial job description or expectations in some ways and knowing this in advance, Veronica can keep an open mind to reading between the lines and discerning what is promised from what is delivered. Observe early on how things- especially interpersonal dynamics in the office- are, and avoid expecting things or people in this organization to be as they “should” be rather than as they are. It seems like later in the year the demands of the job will increase and it will be important for Veronica to strive for balance. This brings a valuable lesson as well, in boundaries and fostering balance in spite of high demands from work.

My sense is that in spite of the demands and mental stress load that accompanies this job it will be endured for at least a year motivated by reasonable pay, and will provide the opportunity to make a good financial start. I feel like Veronica will start to feel stuck at this job but will find it profitable and in under 2 years will have the opportunity she needs to move to the next stage in her career.

This reading was completed using the Girlfriend’s Tarot. This is a delightful deck full of modern, sassy illustrations. It was also a gift from my boyfriend several years ago making it particularly special to me. The Girlfriend’s Tarot is smart, modern, and sassy. Gabrielle Tolliver is the creator and the deck was produced in 2005. The cards are not your typical Tarot or even Oracle type card sizes. They are mini-squares measuring 3.4 x 2.9 x 1.8 inches. They are easily handled by even the daintiest hands and are an ideal deck for younger people (or people of any age whose shuffling ease has been affected by arthritis). The deck contains 78 cards. Ok, I won’t lie, my deck has 79- there are two Hermits but I find this ironic and hysterical, adding to the deck’s charm. The interpretation of the major and minor arcana are different from traditional decks.

They are given a modern feminine spin on the “girl’s night” side of feminism. They radiate girl power while reclaiming everything delicate, curvy, intuitive and light. It is the energy equivalent of estrogen appreciation, rather than estrogen overthrowing testosterone and having an androgenous party. Some examples of its modern spin include the Chariot. I love the interpretation of the Chariot not as a traditional wagon commandeered by a robed figure and pulled by two Sphinx. Rather Tolliver gives us a modern gal balancing on one leg as she propels herself on a razor scooter. It is also balanced both in representation of gender and ethnicity as the figures come in many skin tones and ages. Kings and Queens are expressed as traditional gender connected roles but may be wearing sun shades or dressed as if for a party. Another favorite is the Devil, of all things, a business man with a contract held behind his back. Very clever. The minor cards are also updated. While the Swords are called Swords, they are drawn as pens (which I am told is mightier than the classic weapon) and since Cups or Chalices are rather Medieval, Tolliver gives us cute little coffee-house style mugs which could also pass for large tea-cups. Pentacles keep their name but are drawn as Pentacles inside flower blossoms. The Wands are likewise called Wands but illustrated as Umbrellas. The bohemian style of this deck is also illustrated in the Lovers- a couple standing in a yogic tree pose and supporting each other this way.

The backgrounds are all earthy solid colors, green, yellow orange, burnt sienna, and a neutral grey-sandy color which is much more attractive than the words I am using to describe it *see the picture of the Ace of Pentacles) and the illustrations are simple yet powerful. The point is clearly expressed in each card and a novice can easily learn on this deck. It is just as impressive symbolically in spite of the lighter take on the images. No flaming Tower here, the Tower is a birdcage sprung open from which free birds fly….in escape of some rather small and unintimidating flames. The message is the same- a challenge creating the need to spread your wings and fly, and much more tolerable than suggesting that all of one’s structure has just taken a nose dive…have a nice day. The Girlfriend’s Tarot deck comes with an equally cute instruction booklet, and the deck and book are packaged in a sweet little box with magnetic flap. The box has held up quite nicely.

This deck is very inspiring for me and the images connect me to the energy of milestones, especially those achieved related to youth and the promise of young adulthood. It was also published around the time I graduated from college so I gravitate toward it as a young person’s/college grad deck making it ideal for this reading. Perhaps some day in the future I will look on its symbolism the way people growing up in the 60s look back on the symbolism and trends portrayed in pop culture depicting this time and make enjoy the nostalgic moments. This however brings me to my only complaint about this deck. In order to ensure that it lasts long enough to bring my nostalgic moments, I have had to discontinue using it in one on one readings. After about a year the edges of the cards have begun to fray, not a good track record in my opinion. The quality of the cards do not seem to withstand repeated heavy duty usage and this is quite sad as I would love to make this my ideal on-the-road deck. It would fit in well at Café NOLA, or in graduation parties or gatherings for young adults or trendy people of any age, but I do not trust that it would hold up to rough handling over a long period of time so I have been reluctant to bring it out in order to preserve it. This may just be my deck being special, however. It does, after all have two Hermits!

If you are a beginning reader looking for a modern connection to the archetypes or an intermediate or advanced reader looking for a fresh interpretation, check this deck out just handle it with care. Best of luck to Veronica in her pursuit of post graduation success and happiness! Remember no matter where you are reading this, all readings are intended for entertainment only in accordance with NYS law.

More about this deck as well as purchasing information can be found here:
http://www.amazon.com/Girlfriends-Tarot-Gabrielle-Tolliver/dp/B005Q8NL0CCopyright 2005

About Angela Kaufman:
Angela Kaufman has been exploring divination through Tarot cards for over a decade. She is a Certified Professional Tarot Reader and uses the Tarot and intuition to assist clients in exploring personal growth and development, and in accordance with New York State Law offers readings for entertainment purposes. Angela began providing readings on a professional, “Moonlighting” basis in order to provide affordable readings to those seeking guidance, inspiration and fun. Angela is also co-author of the new book “Wicca, What’s the Real Deal? Breaking Through the Misconceptions.” (Schiffer Publishing, 2011) and Sacred Objects, Sacred Space; Everyday Tools for the Modern Day Witch (Schiffer Publishing 2013).

Moonlight Tarot is now part of The Psychic Connection! Check out the profile at: http://thepsychicconnection.net/moonlight-tarot-psychictarot-reader/
New callers register at: https://prodca.click4talk.com/c4a/usignup_page.php?c4a=30236
to receive your first five minutes FREE!

If you prefer a live reading, check out www.cafenolany.com for listing of Tarot events at Café Nola in Schenectady NY